Karumba was a beautiful spot. It was nice to have a shower and wash the hair after our free camp, but time to head out again towards Mt Isa. Saturday morning it was back through Normanton and off to Cloncurry.

Camps 7 book and the Wikicamps app on the iPad told us of a lovely little free camp about 60km outside Cloncurry called Clem Walton Park. It is easy to find and the road in was pretty good, not as rough as some people said on Wikicamps. As we drove through the gate and rounded a bend we could see a picturesque spot by the water which was Corella Dam. Wow! Quiet, lots of vans and campers but plenty of wide open space to spread out, no one was on top of the other.

A drive through to see where we would be comfortable for the night and the first lady we saw gave us a friendly wave and a nice smile. We returned back to this spot, out of the wind, set up camp, made a cuppa and immediately we had new friends. Irene and Tony originally from England, welcomed us like we had known them for years, they invited us to a campfire after dinner but we also had early drinks with them. 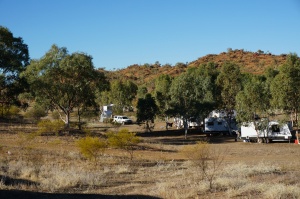 Another gem of a spot.

Walking around we met some lovely young people from Canada and another couple who also had a Pioneer Onyx camper, but brand new, which was interesting to see and compare to ours. Claire and John were really obliging showing us around their new camper. We also met our neighbours John and Shirley, a lovely older couple, who love a chat. 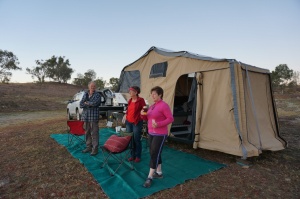 Around the campfire that night we met more friendly people, Warwick and Steph. They have been camping here for the past six weeks and Wazza is referred to as the ‘Park Ranger’, he is from NSW and she is from Tasmania. Many laughs were enjoyed that night as the jokes and stories flowed from all around the fire. It was so great we decided that we would stay Sunday night as well.

John and Tony around the campfire.

Mt Isa was our day trip from the dam, about 68km, and we were glad we made the effort to go there. The only problem was that nothing is open there on Sundays, as far as shopping goes, so we did some touristy things instead. 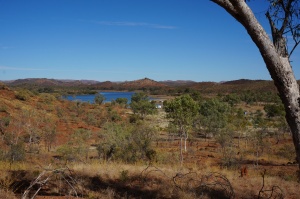 Another of the dam before we head to mMt Isa.

Mt Isa from the lookout.

Gems in the museum.

Heading back to Clem Walton from Mt Isa. Beautiful landscape.

First up we went to the lookout. What spectacular views from up there. Then we went to the Underground Hospital which had an interesting story in itself and our guide Judy was a bit of a character. It was originally built in when the Japanese invaded Darwin in case of invasion at Mt Isa but was never actually used. We had phone network for a short time so rang the boys and mum to let them know we are ok. We headed back for another fantastic evening with our new friends who tried to talk us into staying longer but sadly we have to move on towards home.

Last campfire and an amazing sky.

After saying our goodbyes to these special people we had come to know as friends we have once again hit the road and are heading towards Winton today, Monday. Will probably stay there tonight and move on tomorrow, Tuesday, to meet Murray’s sister and husband, Nerida and Garth, in Longreach for a three night stay.

Cheers till next time. Xo.

a coffee break with mike

unwind from the grind

from dreams to reality

Inspiration through my thoughts, experiences and travels

Simply Made Kitchen and Crafts

Practical solutions and established strategies to improve your blog. Suggestions that will make a difference.

Are We There Yet?
Not Without Salt

Confessions of a Food Tourist

Food, travel and photography - the perfect ingredients for a life-long obsession

getting to know the unknown me

To help enrich the lives of others, we developed RunnersOnTheGo.com to help runners save money on races, running stores, and much more. We also provide the specific local information that makes your travel for business, vacation, or racing as rewarding as possible.