We would have loved to stay on at Oak Park Racecourse for another day or two as it was simply the best but we really needed to get this trip under way again.  Six months sounds a long time but when you start to stop here and there and extend your stay in these places time can go quicker than you think, especially when you have goals.

Murray had seen this camp on Wikicamps so we decided we would check it out and a couple of people said it was good after we mentioned our next possible stop. Wanting to do some camping in a different environment it seemed this would be perfect. I am putting in three photos for reading as they each tell their own story of this magical place which we thoroughly enjoyed visiting.

When we arrived it was very hot and sticky, 32. We quickly checked out the lookout and headed to the camping grounds to take the walk before it became too late in the day. Arriving around 1pm we had lunch and set off on our walk to the bottom, hoping it would be cooler down there. It was a decent walk down 1.2 km, taking around half an hour to forty minutes.  It was very steep, some steps for my short little legs were quite big and jarring and the temperature became a lot hotter. No complaining though as it was exercise and a beautiful view everywhere we looked. The only thing we learnt was that next time we would bring a backpack with extra supplies and put the swimmers on.

Reaching the bottom we were very hot and, after talking with a lady at the campground, we set off downstream to Pyramid Rock, she told us we would find a fantastic waterhole where the water was cool and refreshing. She wasn’t wrong. I was so hot by then and felt the need to drop my core temperature quickly, so I stripped of my shorts and went in in my undies, throwing caution to the wind even though there were a couple in the water ahead of us.  Murray was surprised that I should be so daring. Fresh, cool, relaxing and peaceful. Wow, what a place. We rested here for an hour or so then remembered we had to climb out before dark so we headed back up and boy, was it a climb and half. Although easier on the knees it was still very steep but we took our time and stopped to look back at the beautiful views. 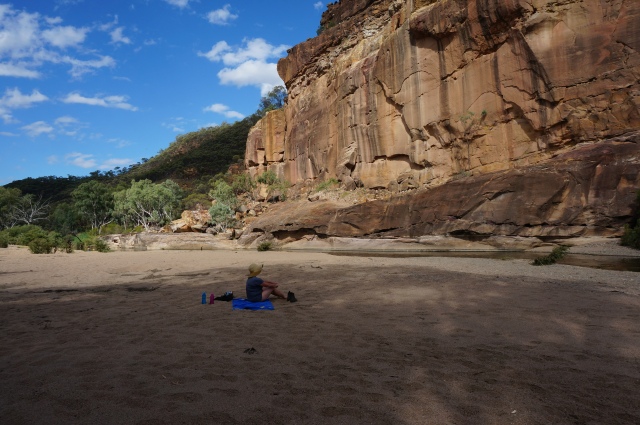 Swimming hole. Relaxing in the shade after a cooling swim.

That night we sat around our campfire, it wasn’t cold but we just had to have one, and reminisced about the day and how glad we were to be in this place of wonder and peace. There were a few other campers but we were spread out enough not to be on top of each other.

The next morning we journeyed to Winton. The trip was uneventful. We had stayed there before and knew we could get our washing up to date, take a decent shower, have a good meal at the Tattersalls Hotel and get reception for our phones which we hadn’t had for a few days now. All of which was achieved. We got to catch up with the boys and Rus and Gladys on FaceTime and let people know in cyber world that we were still okay.

A short funny story (Murray thought anyway) of events later that evening back at camp.  After putting the jug on to  boil Murray set out on a mission for the toilet.  After about ten minutes I wasn’t worried but after fifteen I began to wonder what had happened to him. I waited a couple more minutes then headed to the toilet block calling his name as I went with quiet concern in my voice.  I got no reply and continued around the toilet block to the ramp still calling his name and becoming more concerned, beginning to think he could have slipped over or something and be lying unconscious somewhere and who should I find having a great old chat and laugh with other campers and swapping stories in the dark but his Lordship. I was so relieved to find him okay that I nearly slapped him.

We went back to camp, after a while of chinwagging with his new friends, we were standing by the back of the car chatting and when I turned around he had gone again, just like that. No mention of where he was going or what he was doing thinking he could solve the situation quickly and here’s me wandering around in the dark once again looking for him and I was none too happy with him this time. I went back to camp and awaited his return which was about ten minutes later.  It appears that while I was talking to him with my back turned some man had come up very confused  as to where he was and asked Murray to help him find his caravan.  After much searching they located it and the gentleman was returned safely to his wife.  He apparently had a brain tumour removed and had episodes of confusion and blackouts since. Lucky for him Murray had helped him out.  As for me I did forgive Murray but now a I have given him a personal locator device just in case he wanders again.  Haha.

Tomorrow, Tuesday, we would set off for Boulia and hopefully no missing persons.

Traveller, Cook, Blogger, Teacher's Aide, Swimmer, Mother, Wife and yoga lover. Now retired and enjoying me time.
View all posts by Leanne →
This entry was posted in everything. Bookmark the permalink.

4 Responses to Porcupine Gorge to Winton

a coffee break with mike

unwind from the grind

from dreams to reality

Inspiration through my thoughts, experiences and travels

Simply Made Kitchen and Crafts

Practical solutions and established strategies to improve your blog. Suggestions that will make a difference.

The adventures of the Fealy Family as we try to remember that 'Life is a Journey, not a Destination'.

Confessions of a Food Tourist

Food, travel and photography - the perfect ingredients for a life-long obsession

getting to know the unknown me

To help enrich the lives of others, we developed RunnersOnTheGo.com to help runners save money on races, running stores, and much more. We also provide the specific local information that makes your travel for business, vacation, or racing as rewarding as possible.